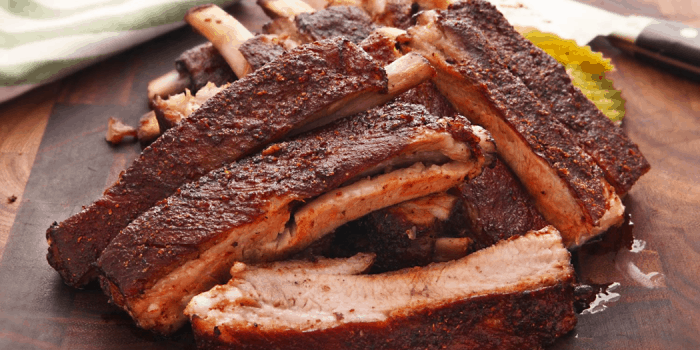 Americans are serious about barbecue. Each geographical region has its favorite and will staunchly stand to defend it. Some of these regions proudly proclaim: Home of the Best Barbecue. That self-labeling has caused a few competing cities to see red then draw lines in the sand. A longstanding rivalry between Kansas City and Memphis once turned downright ugly. Feelings were hurt. Tempers flared. Charges of cheating in the contest held to settle the feud flew.

The self-given “best barbecue” label is not only guarded jealously by cities and states, but spills over to barbecue eating establishments and backyard pits as well. With little provocation, bbq restaurants will rise up, greasy tongs snapping, ready to defend the title. Dare suggest the neighbor’s backyard barbecue isn’t the best you’ve had then prepare to duck hot coals.

Most of those who barbecue base their claim of “the best” on some so-called secret ingredient, special cooking method, or exotic mops and rubs. Most professionals do have a few common sense practices. Professionals never precook meats before they barbecue them. Boiling meat removes the fat and oils essential to the flavor and texture of bbq. Baking meat first releases the juices, oils, and taste that either goes into the garbage along with the aluminum foil or is reduced to a hard brown crust on the bottom of the roasting pan. Good bbq professionals never use liquid smoke. Liquid smoke leaves behind a metallic aftertaste that anyone who knows smoked pork ribs will detect immediately.

Careful preparation of pork ribs for smoking is essential to reaching that lip smacking, meat slides off the bones jubilation, with all the delectable flavor and juices remaining intact. Reaching this state of barbecue bliss requires only a few hours of cooking and smoking time depending on the thickness of the meat.

One step many novice bbquers miss is cleaning the membrane from the ribs. A whitish-gray film covers the underside bones. Dry the meat with a paper towel then place it meat side down on the kitchen counter. Start lengthwise at one end lifting and peeling this skin away. Use a dishtowel, paper towel or pliers to grip it if it proves too slippery for bare hands. If left on, by the time this sinewy cover tenders, the meat is dry and tasteless.

True barbecue is smoked, period. Nothing else can duplicate the velvety undertones of real smoke. A good smoker, ideally one that has a water pan and uses both gas and wood, will closely mimic the commercial pits that use both.

Burn wood chunks or wood chips in any choice of flavor. Soak the chips in water or burn them dry. Wet wood burns slower, but a few hours of thick smoke pluming over the neighborhood might bring the fire department to the door. Unlike charcoal grilled meats, ribs, brisket, or chicken cooked solely with wood retains the smoky flavor even after it’s frozen.

However, if you would like to smoke a lot of meats and have more control over the temperature, you may want to try electric smokers, they can support more food than wood smokers. While wood smokers only have a single cooking grate, electric smokers may have a half-dozen or more cooking racks, each of which can be filled with meats or veggies.

Fatty ‘Cue has recently published a list of the best electric smokers out there based on — cooking space, construction, temperature control, cleaning ease, and affordability.

Exquisite barbecue served from shacks in rundown neighborhoods with bad attitudes smoke the sauce. Open any smoke-filled pit and come eyeball to eyeball with a sooty imp crouched in a corner burping sauce. This cauldron is destined to forever stew in hell. New batches of sauce are added to it as needed. Copy this technique by pouring sauce in a wide kettle or pan, and then smoking it on a covered grill for several hours or smoke it along with the meat.

Some bbq restaurants buy smoked spices to season their barbecue sauce. Cattleman’s Smoked Spices are sold almost exclusively to restaurants, never directly to the public. Cattleman’s blends a barbecue rub from sea salt, paprika, garlic, chili powder, black pepper, cumin, onion, oregano—all slow smoked. Use it to flavor barbecue sauce or buy the smoked spices individually. When buying smoked spices, order enough to make sauce to fill several glass bottles. Cap tightly then keep in the refrigerator for when the hankering for barbecue hits. The barbecue sauce retains the smoky flavor so it can be used to barbecue ribs in the crock pot or a brisket cooked in the oven and still have it taste like it just came off the bbq pit.

The best bbq sauce is the one that satisfies the cook. Make homemade barbecue seasoning then add it to whatever liquids preferred for making the personal sauce. A simple go-by barbecue seasoning mix recipe that’ll season several batches of sauce and serve as a rub for ribs, brisket, chicken, or steak includes the following ingredients:

A wonderful offbeat way to prepare ribs when using the grill is impractical:

Follow these simple tips then proclaim: “Home of the Best Barbecue.” Bon Appetite!