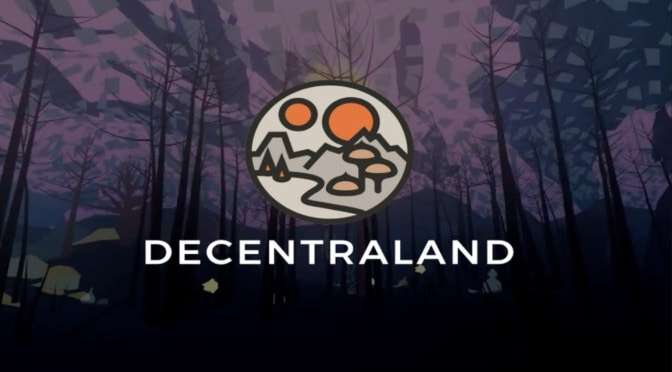 Mana cryptocurrency has to be one of the most interesting blockchain concepts I’ve come across.

They’re creating a virtual reality world, where you can monetise your content within their meta-verse.

But there’s still a lot of question marks about the project.

So in this coin review, we’ll look at the pros, cons and top FAQs around Decentraland.

Decentraland is a digital world where you can own land and build real estate.

It’s like the cryptocurrency version of Second Life (we’ll come onto the differences later).

The interesting thing is you can build your own digital business within Decentraland world too.

And you can monetise it with Mana cryptocurrency, which you could then cash out into Fiat currency.

So what problem is this solving?

Well, renting offline real estate is becoming increasingly expensive. Just look at rent prices in Chicago for example – a one bedroom apartment is $1,685 per month on average. At that point, you might as well invest in your own real estate.

But the problem is, offline real estate is becoming increasingly expensive. However, Decentraland offers a more affordable opportunity to own your own land.

Here’s some of the things you can do on Decentraland:

You might be wondering what’s the difference between Mana and Decentraland?Well, Decentraland is the virtual reality world and Mana cryptocurrency is the token that’s used to buy, sell and trade on the platform.

3. What Type Of Technology Does Decentraland Use?

Mana cryptocurrency has been created as a fork via Ethereum’s blockchain.

That means it can use Smart Contracts for real estate auctions, which is a useful feature for their digital world.

4. How Does Decentraland Work?

Decentraland is like a virtual world game, but with the help of decentralisation you have a lot more control over your content and there’s even business opportunities.

So that means no-one can kick you out, censor or limit what you do.

You can buy and sell Decentraland real estate via their online marketplace in live auctions.

If so, you might’ve spent hours or even days creating and building an epic landscape.

But aside from entertainment, there’s not much of a benefit.

In Decentraland, you can actually monetise the content you create.

From selling your real estate to earning money in your digital casino, Decentraland is promising some cool features.

Here’s an example of how this could work:

6. Is Decentraland Working Yet?

Their blockchain technology is working.

And Mana cryptocurrency is being transacted as we speak.

Their world isn’t compatible with Virtual Reality just yet.

Decentraland will eventually become explorable via a virtual reality headset, but whilst it’s still in beta mode it’s just a 3D map for now.

And the graphics don’t look entirely convincing (just yet). For now though, their open source platform still allows you to program cool stuff on the game.

As a programmer, you get a lot of freedom to build and create your own digital assets on the game.

7. Where Is Decentraland Land Stored?

The actual land is based within a world called Genesis city.

When you visit their market place, you can explore the Genesis City map. From there you can scour the city for plots of land to buy.

There are 70,000 plots of land in the Decentraland world. Decentraland real estate is stored on their IPFS network, whilst you can buy and sell land via their online marketplace.

The land you own is stored on the public ledger and secured with cryptography, which is where Mana coin comes in.

This means your record of ownership can’t be changed or edited by a third party.

This also means no one can be kicked out of the Decentraland universe.

8. How Does Decentraland Tie In With Virtual World Games?

If you’ve ever come across Ready Player One, then you might not be surprised that the founders of Decentraland were inspired by it.

Decentraland is similar to virtual world games you might already know, such as GTA or Sims.

In Decentraland’s digital world, you can buy and sell real estate.

But there’s a lot more to it than that.

10. So Decentraland Has Its Own Economy?

Goods, services and currency can all be traded within their meta-verse.

This creates an in-game economy where users can trade between themselves, without any third party interaction.

Interestingly, every time land is bought, the Mana tokens used to buy that land are burned.

11. What Are The Use Cases Of Decentraland?

Decentraland sounds like an interesting concept but why would they need Mana cryptocurrency?

Well, they’ve actually talked through some of their use cases in their white paper.

So let’s take a look at a few.

Decentraland programmers can develop their own apps within the meta verse. This could include in-world games, gambling and 3D scenes.

Ever seen those iconic billboards in Times Square? Well, Decentraland is offering the same but in digital format.

Companies would be able to pay users to advertise on billboards within the virtual world.

They’d use these adverts to drive brand awareness or even create experiences where Decentraland users can interact with the brand’s products on the platform.

Let’s take World Of Warcraft for example. Accounts holding rare items can often be auction for hundreds or even thousands of dollars.

Decentraland programmers can develop their own rare items than can be traded and collected within the game, creating more value and novelty to the platform.

One of the biggest reasons why people love virtual world games like Second Life is the social element.

On Decentraland, there’d be online and offline community meetups.

With the programming capabilities and creativity of the blockchain, there are going to be loads of opportunities on Decentraland that haven’t even been discovered yet. This could include virtual education, virtual reality tourism and even online training.

If you look at gaming consoles like the PS4 for example, the technology was released years ago but their games are still evolving.

With blockchain technology being so new, I think there’s a lot of opportunities for Decentraland that we probably haven’t thought about just yet.

12. How Much Does Land Cost In Decentraland?

Auction prices vary and this mainly depends on supply vs demand, location and the size of the plot of land you’re buying.

Cryptocurrency prices tend to fluctuate a lot, but you can find the latest prices of Mana here.

Check out the chart below if you want to see their price history. 14. Can You Tell Me About The Decentraland ICO?

So their development team actually started working on Decentraland back in 2015.

But back then, it was just a concept.

They later launched their ICO in 2017. Decentraland actually raised $25 million for their ICO, within just 70 days.

The project was started by Ari Meilich and Esteban Ordano, who have already worked on blockchain projects such as Streamium and Bitcore.

15. What’s Planned On Their Roadmap?

Their ultimate goal is to reach the ‘Silicon Age’, where players can fully immerse themselves into the VR world. Throughout 2018, their development team has been launching incremental updates to the platform.

However, there’s no exact launch date for the Silicon Age.

Recently, the Terraform auction event went live – where users could bid on plots of land on the platform.

The Terraform event was a mass auction for buying and selling Decentraland real estate.

Users could outbid each other in 7 day auctions for parcels of land in the virtual world.

17. Is Mana A Good Cryptocurrency To Invest In?

So the future potential of Mana relies mainly on it’s business model, adoption and use case.

Mainly – if their VR world becomes the market leader, their coin’s value will increase.

18. Is Decentraland A Scam?

They also have a few red flags that you need to consider – this includes:

So whilst Decentraland’s concept is very interesting, the virtual reality aspect of their technology still needs to be developed.

And that’s their key selling point.

19. What Are Some Problems With The Platform?

One of the fundamental problems of Decetraland is that it’s economy relies on adoption.

If Decentraland fails to attract enough users, then their virtual world economy will struggle to become self sufficient.

So what could stop people from using their platform?

20. Is Decentralisation A Problem?

That means you can’t be kicked off the platform and you don’t have to abide by any censorship laws.

However, that’s dangerous too.

For example, could Decentraland become a breeding ground for gambling, violence, piracy and other nefarious activities?

Mana actually described in their whitepaper a process of whitelisting and blacklisting different properties, so that users will be warned before they stumble across content they might find offensive.

21. Why Shouldn’t You Invest In Mana?

22. What’s Your Prediction For Mana Cryptocurrency?

As a gamer myself, I love the concept of Mana cryptocurrency.

A virtual world that you can create and shape yourself sounds exciting.

And if you can do all of that whilst creating your own business, buying virtual real estate and enjoying the benefits of decentralisation, then you have a very cool concept.

I also think virtual reality gaming is just going to get bigger and bigger.

We’re right at the start of it’s development and that’s only going to grow.

However, as an emerging technology, there are going to be hiccups and problems along the way.

It could be years before we see a truly immersive Decentraland that runs completely in VR.

So I see Mana as a long-term hold, rather than a quick win.

If you believe in the future of VR and you’re ready to hold your investment, it could be a decent option.

23. What’s The Difference Between Mana Vs Second Life?

Since launching, Decentraland has drawn of lot of comparisons to Second Life.

Second Life is another 3D virtual world but it’s a lot more established than Mana’s project – it was launched in 2003.

Whilst it’s popularity and hype has died off a little, they still have 600,000 regular users.

So how can Mana compete and why is it different?

Here’s a few differences between the two:

24. What’s The Difference Between Mana Vs VibeHub?

If you haven’t heard of VibeHub before, this is basically an augmented reality project.

It creates a hologram that watchers/listeners can tune into virtually. Why is that useful?

So how does VibeHub compare to Mana?

25. How Do You Buy Decentraland Mana?

So you can buy Mana on most major cryptocurrency exchanges – like Binance or Bittrex.

However, if you want to buy land then check out Decentraland’s online marketplace.

Via their marketplace, you can browse auctions for plots of land, along with prices and bids so far.

You can also explore Genesis City and click around the map to find land for sale.

Transactions are managed via Smart Contracts, so they’re decentralised, transparent and trustless.

26. How To Get Money Back From Decentraland?

If you want to cash out your Mana coin into Fiat currency, simply transfer your coins to a cryptocurrency exchange and trade them back into Bitcoin.

After that, you can then sell the Bitcoin back into Fiat.

If you want own land and want to sell it, you can do this with their land manager marketplace.

27. How Big Are Decentraland Plots?

28. Where Is Decentraland Headquartered?

The Decentraland development team originated from Buenos Aires, in Argentina.As an open source development project, their community works remotely from all over the world.

29. Where Are Decentraland Projects Saved?

Decentraland’s actual content is stored in their IPFS network, whilst transactions and data are managed via their blockchain application.

30. Is There A Wallet For Mana Cryptocurrency?

As an Ethereum ERC20 token, Mana coin can be stored in any Ethereum compliant wallet.

31. Did Mana Cryptocurrency Have A Coin Burn?

Every time someone buys land with Mana, the coin is burned.

The more land is bought, the more scarce the coin becomes – which in turn increases its value.

For example, at the Terraform event, Mana burnt 10% of their coins.

32. Where Can I Find The Latest Decentraland News?