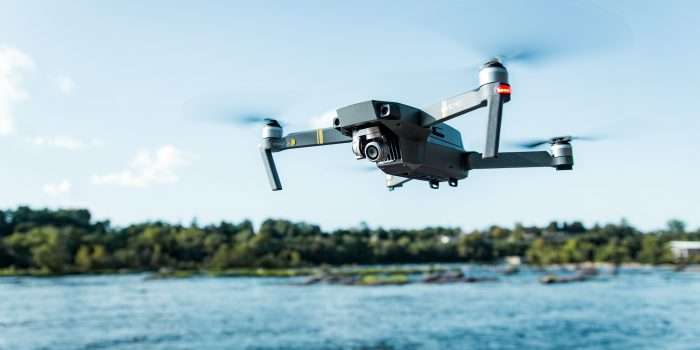 Drones are, despite their ever-growing popularity in recent years, sit within a somewhat specialist and esoteric niche of the tech-world.

So how do you make money with drones?

This guide explains all…

What Is A Drone?

A drone, simply put, is a remote-controlled piece of technology that flies by way of four motor-driven propellers.

Sat beneath these propellers is a camera, allowing the drone’s operator to fly the machine around and record video footage of the world from up above.

Thus, drones are able to capture incredible shots that no non-winged human could ever catch alone.

Essentially, a drone is a flying, remote controlled camera.

Believe it or not, owning a drone can open up a range of possibilities for entrepreneurs to start earning some extra cash.

This article will run through some of the best methods for doing exactly this and diversifying your streams of revenue to start multiplying your salary.

How to Make Money Using a Drone

Well, first and foremost, you’re going to actually need to buy a drone. And, at first glance, drones are pretty expensive.

A decent-quality drone could require an investment of around £500 and upwards.

Don’t fret, though – landing a single job as a drone-photographer will pay back this investment sum instantly.

Anything made thereafter is pure profit.

Which Drone Should You Buy?

Buy which drone should you buy?

I wouldn’t suggest buying a drone with a camera quality of anything less than 4K.

This because, if you did fall short of this, you’re likely to just be outbid by other drone-owners that can offer better quality footage.

If there are better options around, people aren’t going to pay you decent money to film for them if you’re not offering the highest available resolution.

Next up, you’re going to need an iPad.

This is also pretty essential for the functionality of your drone and will act as your drone’s remote-control mechanism.

Now I’m not saying you need to spend thousands on Apple’s best-available iPad, not unless you want to hinder your profits before you’ve even started earning.

No, instead search the market for a mid-range, second-hand iPad.

You shouldn’t really need to spend more than a couple of hundred pounds here – anything higher would be superfluous.

If you’re flying to earn money (which, you are if you’re reading this article), you’re going to need some licensing. To

find out exactly what type of UK license your work will require, head on over to this site for more information.

Next, you need to decide whether you want to create a business or go it alone.

Creating a DBA under your own name is an option, however drones are fully capable of causing serious injury to anybody they hit – think of them as a mini-helicopters whose blades could sever limbs if they come into contact with any.

If you form a DBA and happen to cause such an injury, you stand to lose just about everything you own in the courtroom.

Forming an LLC, however, will protect your personal belongings (home, assets etc.) and so, should anybody get hurt under your control, the most they could do is sue you.

First off, go ahead and purchase a domain name (from one of: Bluehost, GoDaddy, HostGator etc.).

Then, connect your domain to a software such as WordPress and begin adding drone footage (that you’ve filmed) to your site, as well as information about the experiences you’ve gained as a photographer/videographer.

It’s not essential that you make your website look incredibly fancy, just so long as the footage and credentials you display within it are of a high-standard, a standard that you’ve expect when searching for employees for one of your own projects.

On this site, you should include a logo that represents you as a business. If you suck at Adobe Illustrator or art, you should outsource your logo and pay somebody more skilled in this area to create one for you.

Once created, your logo should be very clear on your website as well as any other social media pages you’re a part of.

This logo is how businesses are going to recognise you in the future.

It’s important not to scrimp for the sake of protecting your profits, only to find that your tacky £5 logo drives all potential clients away from your site.

Building onto this, business cards are another invaluable investment for all freelancers.

Have a decent set of business cards made that you can begin to hand out to potential clients and be sure to always keep them handy – a few in your wallet, some in your car, your coat pocket, office etc.

If ever somebody enquires about your work, hand them a physical representation of it in the form of a business card rather than overwhelming them with verbal information that they’re likely to forget the next day.

And, finally, begin to practice flying your drone as often as possible.

To do this, you may wish to invest in a smaller, cheaper drone to practice with and gain some experience.

You should fly this around your house do begin with until you’re completely comfortable with controlling it.

Then, invest in a more expensive drone and practice flying that, inside and outside.

As you venture outdoors with your drone, begin making lists of local facilities such as power plants and wind-turbine farms.

These are the types of businesses that will pay decent money to drone-owners to take shots of their work that can be displayed online.

In time, you should begin to visit these varying facilities, letting them know that you’re a drone photographer looking for work.

Have a fixed rate in mind and always keep your business cards handy, making sure to give every manager your meet a card for future reference.

It’s very common for these boilers to have problems, problems that would typically require a team of engineers to venture inside of the boiler and try to figure out what’s wrong.

Unsurprisingly, this creates a number of issues for the respective company – insurance for the workers, heightened the obvious dangers involved with a group of people having to crawl inside a pitch-black boiler.

These sorts of expenses can end up costing upwards of £10,000 per day, costing businesses an absolute fortune just to repair a dodgy boiler.

You, however, can simply fly your drone right inside of the boiler, take some pictures, film a couple of videos and fly it right back out.

Charging just £1,000 a day would save companies a tonne of money, thus it becomes clear that there is a lot of money to be made by helping companies identify energy-production issues.

Considering how unhelpfully enormous they are, it can be incredibly difficult for owners of wind-turbines to get up to the top and identify any problems with their functionality.

I personally wouldn’t have the foggiest clue how a team of men could reach the top of a turbine and figure out what was wrong, or at least without forking out a load of cash to get them up there.

As you’ve probably already guessed, your handy little drone can be flown straight up to the top of a wind-turbine.

Taking a few snaps of the boxes at the top can save businesses thousands, subsequently opening doors for you to make thousands.

Searching around for new construction projects can also open doors for you to make a lot of money.

When you see a new project, head on over and locate the project manager who will typically be sat within some cosy building away from the central construction area.

Show him some pictures and videos of your drone footage, drop him a business card and let him know that you could shoot time-lapse footage of his project, allowing him to see exactly how well it’s coming along.

Without your service, managers will usually need to hire out nearby buildings to use just to take pictures, again giving you an opportunity to earn a decent amount of money.

And that, in a nutshell, is how to earn money by using drones.

Aim to build up as many contacts as possible to begin with until you have a decent client-base.

Then, take on the projects that suit you and begin earning money simply for flying a drone!